Not as prevalent or culturally recognizable as Karate or Judo, Aikido is arguably the most complex, elegant and limitless of the martial arts originating from Japan. Its flowing movement and, by design, effortless blending with an opponent’s energy makes it especially relevant in today’s stressful world. So what makes this mysterious art so unique and powerful?

The word Ai-ki-do was evolved by the art’s founder, ‘O Sensei‘ (great teacher) Morehei Ueshiba. In essence, it connotes the path (“do”) of unifying (“ai”) one’s personal energy or life force (“ki”) with that of the universe. Aikido’s martial origins evolved out of a complex and long lineage of training and technique leading up to Budo (warrior arts of the samurai), and its late-stage influence from daito-ryu jujitsu (the legacy of which can be readily seen in the many wrist immobilizations and throws), and from which the founder developed aiki-jitsu, and then Aikido.

Aikido’s greatest contribution, ultimately expressed through the founder’s aims to unify humanity through self-purification and love, is as its legacy as the ‘Art Of Peace.’ What this means, in a practical daily sense, is that one is able–through the principles and experiential practice of ‘non-resistance’ in Aikido–to eradicate the habitual and aggressive reactivity of the subconscious mind, and thus karma, in the world at large.

In other words, one learns how to calmly and harmoniously blend with conflict; in its highest form, this transcends conscious action and stems agression before it takes seed. This has two layers: firstly, one becomes a calm and peaceful presence in the world, thus becoming ‘part of the solution; secondly, one’s ability to ultimately extinguish the impulse of agression before it arises in actions or intent leads to a more human society. 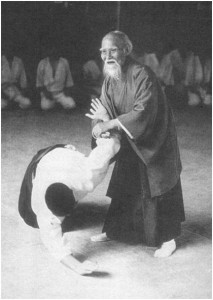 While this may seem impossibly challenging in a technical sense, or in the least intimidating, some basic neuroanatomy helps to understand what is happening on the physical and emotional level. In a bio-psychological way, what happens to the average person presented with a threat is that their mid-brain structures immediately trigger a ‘fight/flight’ response. The prefrontal cortex of the brain, associated with rational decision-making, is interrupted by a more primal response to protect the organism (run/fight, ask questions later!). By working with our subconscious minds, we can learn to override this reflex, consciously and calmly responding with only the minimal actions necessary.

In effect, by responding this way (in keeping with conflict resolution theory/technique) we also have a much better chance of abating the hyperarousal of our aggressor. On a neurobiological level, so-called ‘mirror-neurons’ come into effect, and our calm, confident presence and gentle assertive energy and movement can effectively ‘calm’ the violence of our ‘attacker.’ Ultimately, we cannot assert control over the free will of another–particularly if they are in a hyper-agitated and wilfully aggressive state.

With a spirit of loving protection, however, the superb blending movement of Aikido can quickly, smoothly and with minimal effort dissolve the attackers movement and assert control over the situation.

In our Aikido training, emphasis is placed on developing this awareness and re-conditioning the subconscious mind/body through Ki Development. Simply put, through exercises that could be described as non-reactive ‘moving meditation, ’ we make our new habit that of connecting with the groundedness of Earth, and the limitlessness of Heaven. By extending this feeling in all directions at all times, we both embody and project a feeling of ever-expanding stability and a light feeling that can benefit us in every thought and action.

It was Ueshiba’s vision to unite humanity through the spiritual practice of Aikido–through Love. And yet, as Siddartha Gautama, the ‘Buddha, ’ said of the birthright of enlightenment and liberation through mindful meditation, you cannot take action on dogma or doctrine–you must investigate and discover it for yourself…